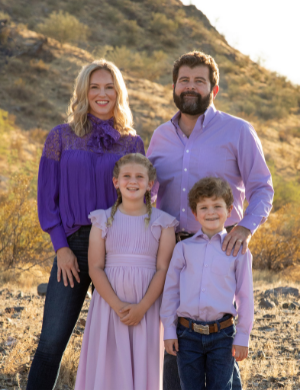 Philip John Calihan IV, “PJ” was born August 30, 2012, and was 8 pounds 6 ounces of perfection. Just over two weeks early, he was enormous. Big sister Claire was as excited as we were! PJ was the best baby, he was eating and growing and besides some projectile vomiting (which did not seem out of the ordinary since Claire had it too) all was right in our world.

By about four months old, we started seeing red flags. Each time we fed him, he had fits of choking and gagging followed by severe vomiting. We would no sooner “finish” breakfast and it would already be lunchtime. We didn’t know whether to start lunch or give him a break as we knew that the choking, gagging and vomiting would soon follow.

The choking and gagging got so bad that PJ began to refuse to eat at all and he lost two pounds in one month alone. We were scared to death; something was seriously wrong with our baby boy. We needed help and started searching for answers.

Around that time, I had been invited to attend the first Annual Feeding Matters Community Luncheon. While listening to the keynote speaker that day, I couldn’t breathe, my heart raced and tears began to pour down my face. Then Shannon Goldwater, founder of Feeding Matters, spoke and I was almost inconsolable; two people, in a matter of minutes, had experienced almost precisely, what my husband and I were going through at that exact moment. I felt as if these two people were talking directly to me in a room of hundreds; it was paralyzing and comforting at the same time. The pure isolation I had felt was dissipated because of Feeding Matters; I wasn’t alone for the first time in months.

Being paired with a mentor in the Feeding Matter’s “Power of Two” program changed our lives and the direction of PJ’s. As my family can personally attest, the Power of Two program is truly impactful, effective and life changing. Feeding Matters will be forever deep-rooted into our family’s history and we will be eternally grateful for the support of this organization.

Since that first luncheon, Feeding Matters has experienced considerable growth and in now a national organization supporting families and professionals worldwide. Their work is changing the trajectory of millions of children struggling with pediatric feeding disorder (PFD).

PJ’s feeding journey is a long one, still ongoing, but overall a success. We are firm believers that early intervention is prevention. Feeding Matters has been an integral part of our journey; they gave us hope when we had none. Phil and I are beyond proud to serve as this year’s honorary chairs and hope you will join us on November 5th to learn more about how you can support Feeding Matters and families like ours.