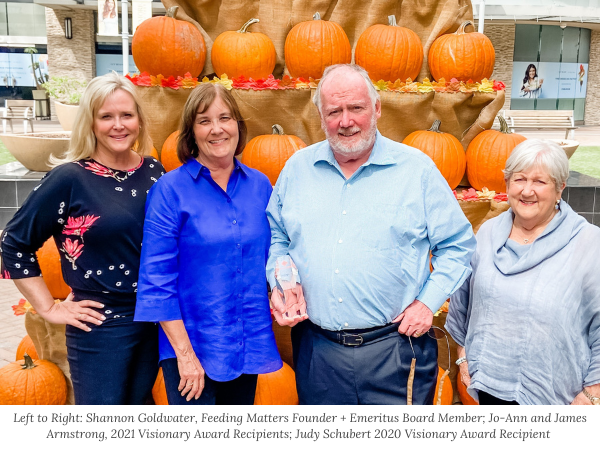 Feeding Matters will honor Jim and Jo-Ann Armstrong with its Visionary Award at the 9th Annual Community Event on November 5, 2021.

The Armstrongs have been integral supporters of Feeding Matters from its inception. The Armstrong Family Foundation was one of the organization’s first funders which allowed for critical early growth which opened the doors to future funding. Those were not the only doors the Armstrong family opened. The first office space that Feeding Matters called home came through Jim’s leadership and generosity. Several of the Armstrong family members have served in a leadership capacity including on the Board of Directors and as Lead Partner for Feeding Matters as part of a grant received from Social Venture Partners. Additionally, the entire family has continued to advise Feeding Matters over the years, and most recently, invested in the Power of a Name Campaign.

“When we first met leaders at Feeding Matters, we were appreciative of their mission and the energy they brought to addressing the need. They had a clearly defined strategy, and we were happy to be early financial supporters,” said Jim Armstrong. “We watched them grow from a start-up to the impressive and important institution they are today. We are thrilled with the success of Feeding Matters and congratulate them on the relief they have brought to thousands of families,” Armstrong concluded.

“The Armstrong family has been pivotal in allowing Feeding Matters to become what it is today,” said Jaclyn Pederson, chief executive officer of Feeding Matters. “We are forever grateful for their trust, leadership and support.”

Jo-Ann Armstrong has been an active figure in Phoenix philanthropy for decades. She is currently a board member of the Armstrong Family Foundation and the Kiita Foundation. Previously, she held board member positions with the Salvation Army advisory board and ASU’s ACES program. In addition to raising four children, she was instrumental in the development of JDA Software in its’ early years and has received many awards, such as the Paradise Valley Volunteer of the Year, ASU’s Outstanding Community Partner and the 2002 Sally Award from the Salvation Army. She has also served as a member of ASU’s Women and Philanthropy.

Jim Armstrong is the founder of JDA Software Group, Inc., (now Blue Yonder). He has served as CEO, director, chairman and co-chairman since founding the company in Canada in 1978. He is currently serving as director and President of JDA Investments (US), Inc. He has served on the board of directors for various companies. He is President and Chairman of the Armstrong Family Foundation, President and Chairman of the Kiita Foundation, and Director of the Rancho Feliz Charitable Foundation. He has received numerous awards and honors including Arizona Software Association Business Leader of the Year, Ernst and Young Master Entrepreneur of the Year Award, Ernst and Young Spirit of Philanthropy Award, Ed Denison Business Leader of the Year Award, National Society of Fundraising Executives Spirit of Philanthropy Award and Arizona Technology Council’s Lifetime Achievement Award.

Feeding Matters’ Visionary Award was created to recognize an individual(s) or corporation who has exhibited passion and commitment to help further the advances in pediatric feeding disorders. This annual event will be livestreamed on a national stage, from Phoenix, AZ on November 5, 2021 at 9:00 a.m. AZ and 12:00 p.m. EST.

Register for the event or make a gift in Jim and Jo-Ann’s honor today!